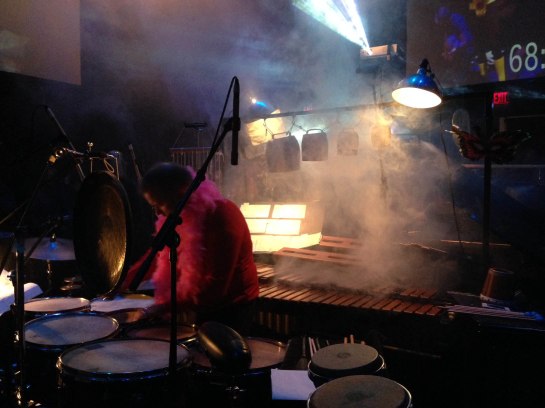 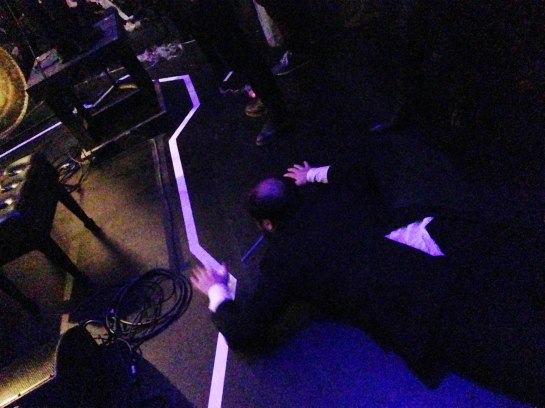 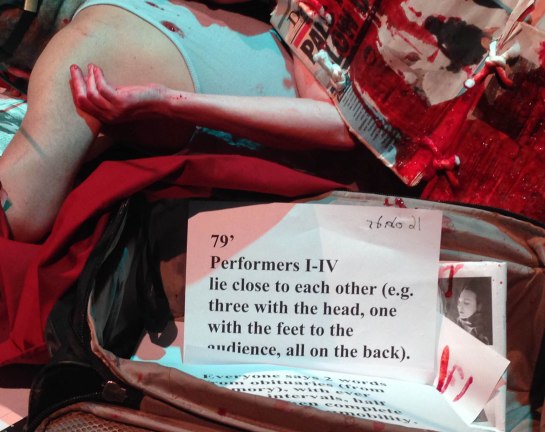 All color images, unless otherwise captioned, by S.K. from the 2014 Originale, at The Kitchen, New York.

Originale, composer Karl-Heinz Stockhausen’s 1961 music and theater work, written in collaboration with artist Mary Bauermeister, is typically called a response to the “happening.” Placing Stockhausen’s infamous composition Kontackte—music both pre-recorded and live that breaks conventional musical structures and tone and textures—at its physical center, Originale uses a written “score” of rudimentary timed instructions to give form to spontaneous enactment in place of familiar theatrical modes.  Music and actions are performed by professionals and non-professionals, and observed by an audience free to move around during the production. Re-staged infrequently, it recently turned up in a two-day run in New York, co-produced by The Kitchen and the Goethe-Institut, 50 years after it’s New York performance. 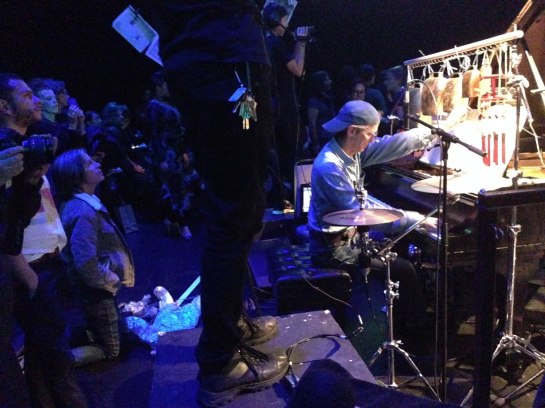 What questions arose in deciding how to re-stage something that depended on improvised enactment of brief directives tied to a temporal structure, re-staged from a time when “happenings” resonated to a current moment when they don’t at all? What survived of the original and what didn’t? More importantly, what should have survived? Might a more “authentic” re-staging have involved some sort of reproduction of the original, based on extant documentation, rather than an updating? Would a “dated” reconstruction have actually been more “true” to the original? Or does the improvisational aspect of the work preclude the option of a “vintage” re-staging?

Some period photographs and film footage and descriptions and reviews of the 1964 New York production survive, but in any case, a time-based, partly spontaneous work in-the-round can only be elliptically captured on film, even with a roving camera and montage editing. To wit the beautifully evocative little black and white film (Peter Moore and others) of the 1964 New York staging directed by Allan Kaprow at New York’s Judson Church. How much the audience moves around in the 1964 production is impossible to ascertain, especially since the camera seems to try to represent mostly performance activity, rather than audience.  But you can peruse the audience’s affect and hear their titilated laughter at several points, like when a costumed character walks through the space with huge dangling stuffed penis and balls. 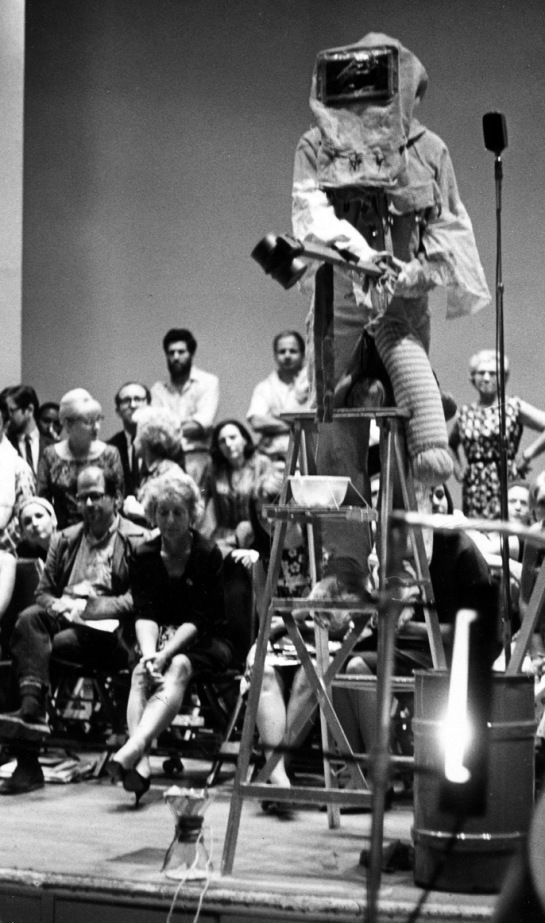 View from 1964 production of Originale, at Judson Church, New York.

Laughter and a kind of joyful dismay can be heard when various performers indulge in the absurd, or at least what registered as absurdity in 1964, such as when one character retreats into a space under the stage. Absurdity depends on the presentation of the unexpected, and in 1964 that inversion was not predictable. At The Kitchen, this space-man- or bee-keeper-like flasher seems to have been brought into the present through other kinds of excess – physical volume that distorted the body, screechingly surreal statements, mental instability, gender indeterminacy…and no audience reaction was audible or visible to me. 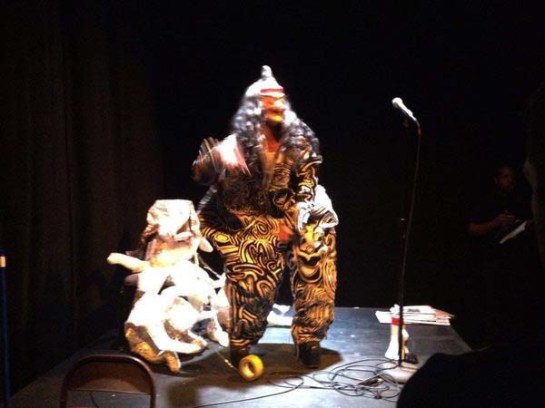 Image of 2014 production at The Kitchen. Photo: https://twitter.com/wyszniewski

Decisions seem to have been made in the recent staging to insert into the space of The Kitchen four symmetrically-placed stages paired with large elevated screens that showed continuous real-time video recorded by figures directing video cameras at the four stages or, less frequently, at the musicians in the center of the space. 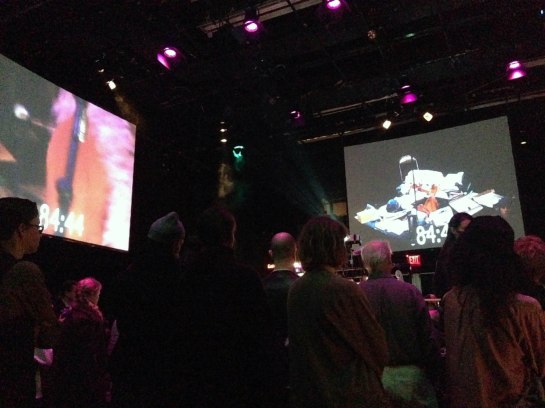 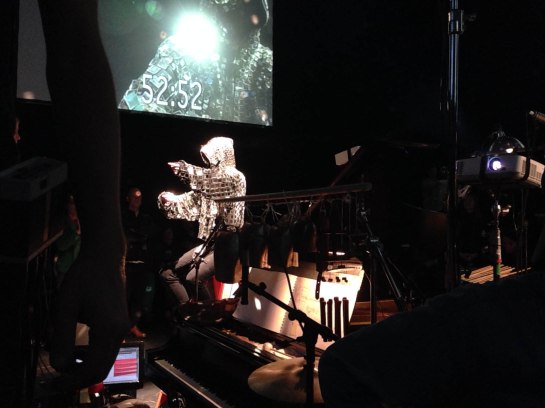 The physical staging at Judson Church in 1964 seems to have been less organized, more amorphous. In fact, the stage at Judson is occupied fully by part of the audience. Not having witnessed the original Cologne staging, it’s hard to say whether this is a deviation from the original, but the symmetrical distribution of the four stages at The Kitchen seemed to be a strangely rigid spatial organization at odds with the music and ideas behind the project . Even though the “actors” left the stages periodically to rove around the central setting of musical instruments and musicians and amongst the audience, usually replaced by others on the stages, those four stages rigidly anchored the space and rendered symmetrical the movement and placement of the audience. That one staging decision set the tone for spectatorial perception in general. Among other things, it seemed to privilege panoptic visibility. 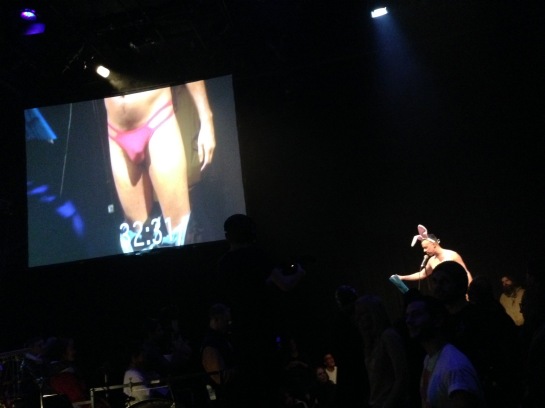 And what was accomplished in the recent re-staging by allowing spectators anywhere in the space to view on the elevated screens almost every action taking place on every stage in a given moment? This is in contrast to the Judson Church setting, where multiple vantage points were offered by the vertically layered space, in addition to the use of various ad-hoc “vertical” stages, and a greater use of the floor as a “stage.” A small TV monitor showing mostly abstract bands can be seen in the Moore film, as well as a brief projection of a montaged film, but these mediums don’t overwhelm other activities. 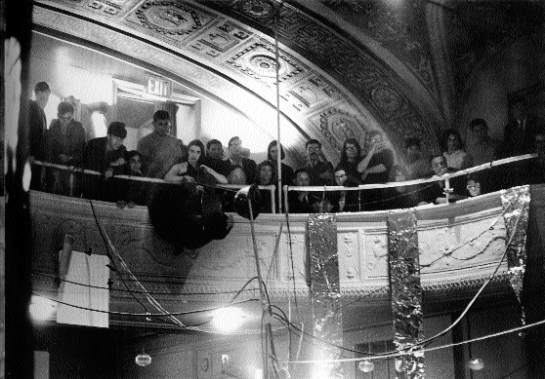 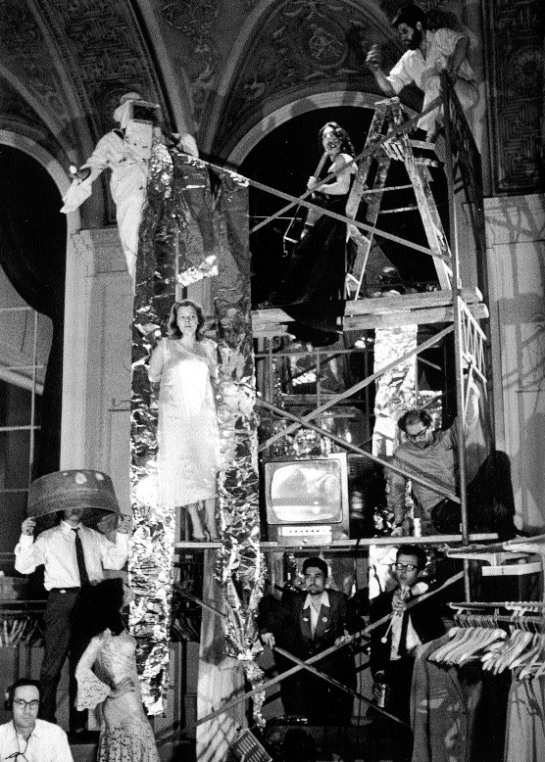 Although there is one working clock in the Judson space, on which the film camera lingers, there is nothing in the documentation of the early productions to indicate that the audience was to be made aware at all times of the exact minute and second of the duration of the production, which in this instance were continuously registered on the screens, so that the possibility of a distorted or open-ended perception of time was foreclosed. From what the Moore film shows, the clock could act as a reference for spectators, or not. At The Kitchen, it was overbearingly present. 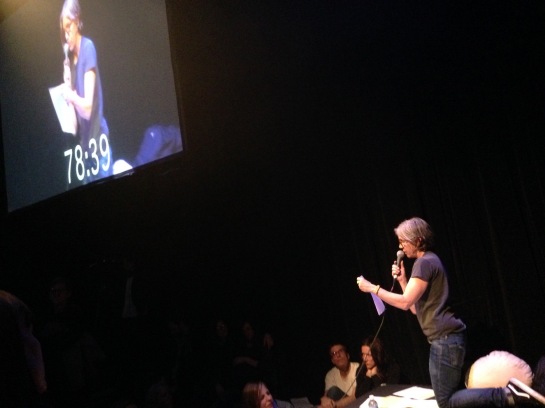 Oddly enough, my most resilient memory of the “counter-cultural” in the late 60s was that of a transgressive attitude toward time—the experience of time without the enforcement of schedule, plan, or goal produced a visceral feeling of inhabiting the fringes of the normative world.

What was this re-staging trying to say about time-structure and technological simultaneity and omnipresence? The time-codes in this staging might have been meant to make a point about the distracted and infinitely trackable present, but the question is whether the point couldn’t be more critically made by not updating the production, and in that way establishing a visceral difference for the spectator. A visceral difference, for example, from today’s taken-for-granted aspects of technology’s ability to pinpoint us. Giving a re-staging, 50 years after the fact, a contemporary “look” is not equivalent to giving a work contemporary value. It’s clear that the attempt was to avoid a fly-in-amber approach to a work composed decades ago. Hence the transposition of “characters” and spectatorial activity into generally more contemporary images and imaginaries, such as the trans quality of a lot of the characters – human or animal, gender-amorphous. And transposition is an interesting strategy for a temporal re-staging, if the logic goes something like “how do we transpose the fringes of 1964 into the present when such historical fringes no longer have any relevance?”

Sometimes – as with so-called classical or traditional ballet choreography – a more heightened awareness of historical genre and trajectory can be created through a lack of temporal revision. In the 1964 New York Originale,  the characters called “models” dress and undress by taking clothes from racks surrounding the musicians, and primping and parading around the space like models on a runway or in a department store, selling both merchandise and femininity. The “models” in the Judson Church production fit the period’s Euro-American conventions of model femininity -slim, white, and beautiful by the standards of that moment. 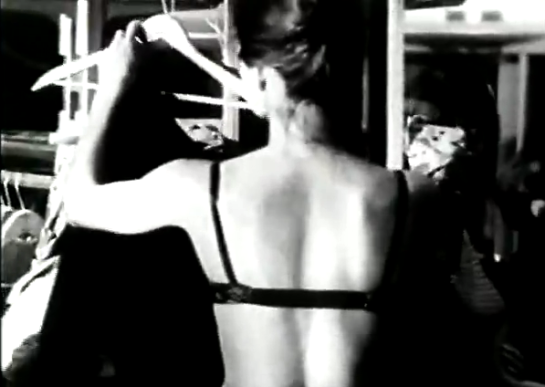 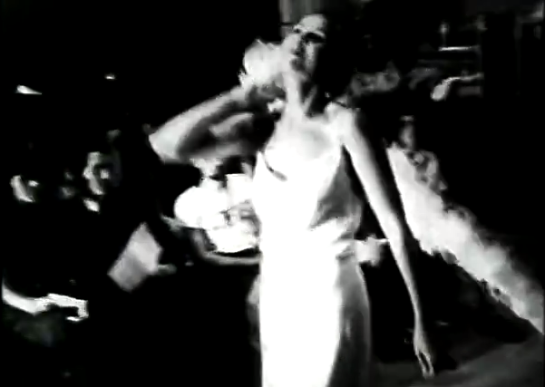 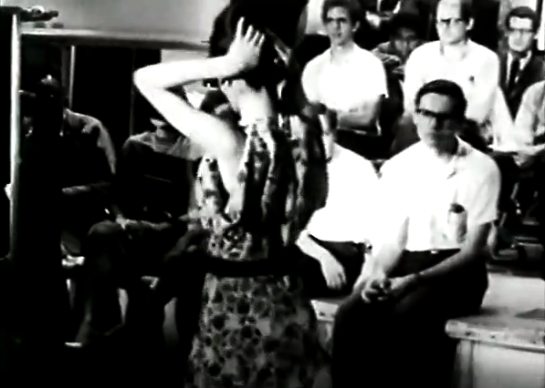 In the 2014 production, two different figures play the “models” (who I think are now generically called “performers”) – on one night it’s the black singer Bishi, who has described her body as “extreme” and “unacceptable to the fashion world.” On the other night, it’s a grey-haired Mx Justin Vivian Bond, a trans writer, painter, singer, and performance artist who has written “For me there is no opposite sex. For me there is only identity and desire.” 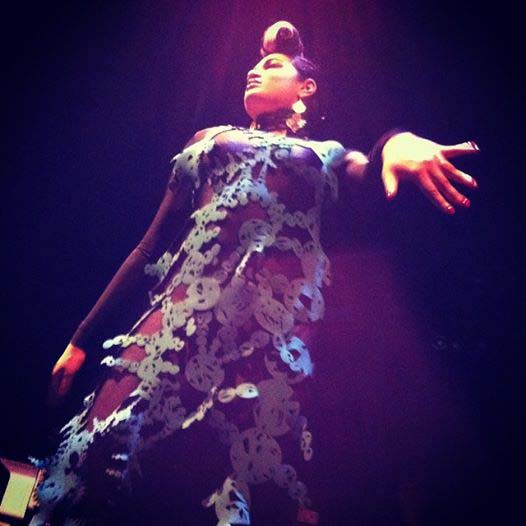 Photo of Bishi in 2014 Originale at The Kitchen. Photo: from Three-as-Four Facebook page. 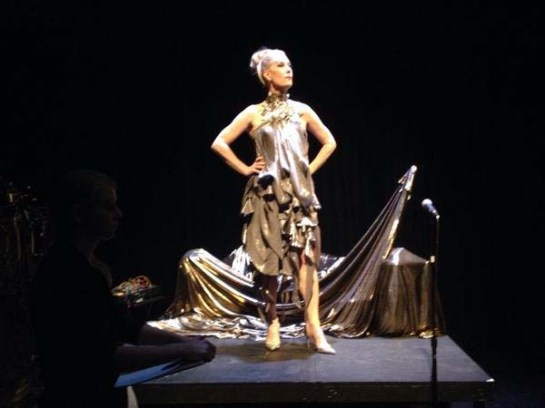 Photo of Justin Vivian Bond in 2014 Originale at The Kitchen. Photo: https://twitter.com/wyszniewski.

The transposition of the 1964 “models” into these two figures seems to be an attempt to point to new “models” of femininity or sexual “identity,” and also to incorporate a shift from generic to particular models, to figures whose bodies are the support for work that is not passively offered up to the gaze. That move has all the hallmarks of the critical, but at the same time it passively retains the structure of the model – in particular, to performative figures who circulate through social media – when what we may be looking for in an update is a critique of the structure of the model itself. Could that point not have been made in a more radically nuanced manner by reproducing the anachronistic look of the 1964 “models,” and allowing spectators to judge them as models of femininity through a retrospective gaze?