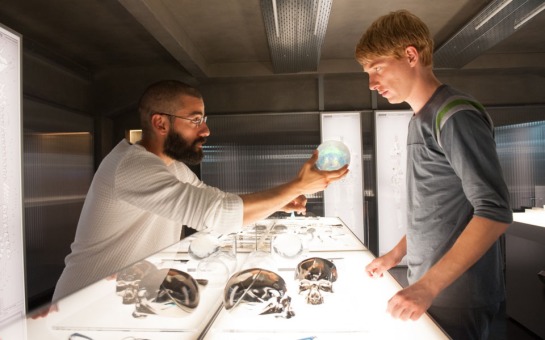 A young male programmer employed by a Google-esque company wins a contest to spend a week in the paranoically secluded abode and laboratory of the company’s grandiose and manipulative CEO. The programmer is to assess an artificial intelligence in the form of a beautiful young female robot invented by the CEO, an A.I. generated through the culling of data from millions of company user searches (desire and knowledge) and images taken from masses of phone data (affect). Can it pass muster as human, with human defined as having complex intelligence, decision-making skills, and individual personality? This is the narrative schema of the new film, Ex Machina, a film that ventures into the under-examined territory of the algorithm with a degree of criticality not found today in most artworks or even discursive texts.

In a recent article about artificial intelligence in the Science section of the NYT, the journalist’s discussion of how unlikely is the possibility that we could create the kind of autonomous A.I. robots pictured in the film could not be more wrong about what is really at stake in the discourse and imagery of the film. The journalist reads the film concretely and reassures readers that we are far from achieving A.I. in robot form because the most advanced robots in the U.S. today are “glacially slow in accomplishing tasks such as opening doors and entering rooms, clearing debris, climbing ladders and driving through an obstacle course.” Robots, according to the article, are dependent on human operators to guide machines via wireless networks, though some are semi-autonomous. They are “largely helpless without human supervisors.”

Yet that is precisely what we have to fear.

A lot of the anxiety doesn’t come from any real situation that A.I.s are about to take us over or the world is about to change because of A.I.s in any fundamental kind of way — not at the moment at any rate. It’s got more to do with big tech companies and the Internet and search engines and social media and that kind of thing. I think there’s a sense in which we feel that we don’t understand how our cellphones and our laptops work … but those things seem to understand a lot about us. Now that’s not really about artificial intelligence, it’s about tech paranoia. So somewhere in this I think I’m trying to look at that, too.

The other thing I was interested in was the way tech companies present themselves. So Oscar Isaac’s character Nathan talks in this very kind of familiar, pal-y way. He uses the word “dude” and “bro” a lot. And I felt that this was sometimes how tech companies present themselves to us. They’re kind of like our friends. They say, “Hey pal, hey dude,” like we’re kind of mates, you know, “I’m not really a big tech company, I’m actually your friend and we’re hanging out sort of at a bar or at the beach and we’re sort of part of each other’s lifestyle, but at the same time I’m going to take a lot of money off you and I’m going to take all of your data and rifle through your address book” and that kind of thing.

The critical dimensions of Ex Machina depend on a synthesis of the visual, the visceral, the aural, and the scripted. But like a lot of great films, Ex Machina achieves visually what cannot be enacted through language. Yes, the storyline is creepy, and its arc is that of a moral tale about A.I.s taking over the world. But the visual and affective aspects of the film draw in the spectator in ways that go beyond that of a repressible moral tale. The film’s subtle visual effects, the decisions made about just how close to hew to the visual realism of human skin and features and affect, and just how far to veer from that realism and at which moments to do so- these create a spectatorial engagement semi-separate from that of the script. Just as an utterance or an exchange or facial expression in the psychoanalytic setting can have reverberating effects on consciousness and on the unconscious, so can the unscripted aspects of film, independent from a story line, independent from its narrative ending.

Granted, it’s a common trope in science fiction or cyberpunk fiction to create a frisson of sameness/difference where the human and the robotic meet. 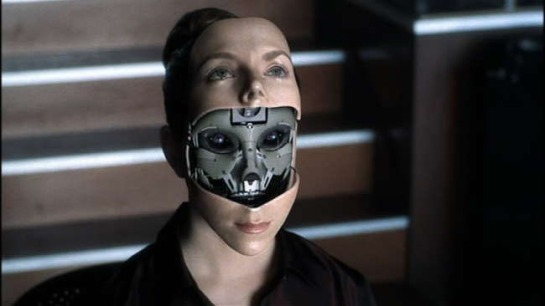 But Ex Machina deploys the visual trope through a deeply intelligent understanding of how to manipulate it to critical ends.

I will admit to spending a good part of the film trying to figure out just what special effects they used to achieve the creepy elision of space between human and robot in the Ava character; the physical interface between human and robot in Ava is fascinating. I was able to attend to this throughout the film because of its pacing, and I think that musing on that intermittently was actually one way of experiencing the film. I was only able to find an explanation of the effects employed through the accretion of information from a few articles after the viewing. Garland’s script is allegorical, something the science writer didn’t pick up. It’s not about A.I. per se. It’s the throwaway lines that haunt – the references to the CEO’s access to the memories and desires of hundreds of millions of us; Ava as the encapsulation of that access.  Ex Machina‘s particular ways of blurring the space between human and A.I are what gives the story its significance and its affective pull. And this is best achieved visually, so as to leave the viewer with the question (a visually composed question) of just how large they’d like that space to be.