Pundits and journalists and podcasters are flush with midterm election dissection, endlessly discussing the good and the bad in regards to challenging the radical damage being done by Trump & Co. But for the most part, in the American media it’s always Groundhog Day, and when a country finds itself divided down the middle in the ugliest of ways, it must be due to something that happened yesterday, or, better yet, today. Ah, if only dissecting the past was sexy, addictive, or gif-able.

With a mad king in the White House and the GOP gleefully stacking the courts and hacking away at whatever was left of the separation of powers, who potentially deals with what gets shunted to the side – history and its psychical consequences? 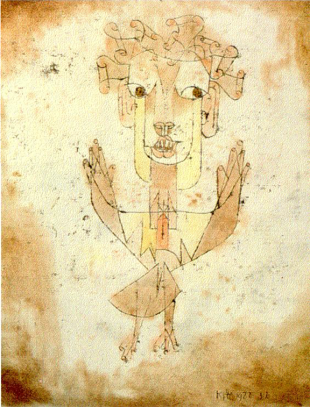 A Klee painting named Angelus Novus shows an angel looking as though he is about to move away from something he is fixedly contemplating. His eyes are staring, his mouth is open, his wings are spread. This is how one pictures the angel of history. His face is turned toward the past. Where we perceive a chain of events, he sees one single catastrophe which keeps piling wreckage and hurls it in front of his feet. The angel would like to stay, awaken the dead, and make whole what has been smashed. But a storm is blowing in from Paradise; it has got caught in his wings with such a violence that the angel can no longer close them. The storm irresistibly propels him into the future to which his back is turned, while the pile of debris before him grows skyward. This storm is what we call progress.

Walter Benjamin, Theses on the Philosophy of History, 1940

This storm is what we call progress. Having recently finished an artwork that addresses the psychical underpinnings of the present moment, I have been thinking about the question of time in regards to the psyche and politics; about how art has the potential to create an experience similar to that of the psychoanalytic therapy session. Illumination can occur retrospectively after talk therapy, without conscious effort or application, and the potential to illuminate retrospectively, without conscious effort, also belongs to the realm of culture.

Nachträglichkeit [afterwardsness]… implies a movement from past to future: something is deposited in the individual, which is only activated later on…Laplanche compares this to a delayed-action bomb.

Time and the après-coup, Dana Birksted-Breen, 2003

The predictable, but still shocking, re-revelation that the U.S. voting population is basically divided down the middle – politically and geographically – was made that much more evident in the midterm elections. Rural areas were solidly behind Trumpian candidates and they voted with the vengeance that his inflammatory rhetoric fanned. But I have yet to hear a journalist – even the liberal ones – discuss the historical and psychical underpinnings of that phenomenon. Beyond the easy labels, why is that population so susceptible to Trump’s rhetoric? Once we label them racist, xenophobic, and mysoginist – do we not want to understand how they got there and why they are so untouched by progressive discourses? Why them and why there? There are some maps around today that when overlapped show frightening indications of how the legacies of economic precarity and under-education can predict a susceptibility to an identification, with Trump’s discourse of resentment, at least when not overridden by the racial or ethnic or religious threats that may motivate a voter to see through it. The other day, a liberal, black MSNBC host referred with gleeful contempt to how even in a small city you can find pockets of “techies” who vote democratic, while rural areas don’t have techies at all, and therefore can be ignored in soliciting democratic votes.

The U.S. is a country particularly devoted to the idea of the here and now. It is the not-surprising ethos of a country born out of the trauma of repressed genocide and mass immigration that define its foundation. But as psychoanalytic theory has pointed out, the here and now is also suffused with history. The present is multi-directional – the past can be known from the present, and the present can be known from the past. Yet we persist in sustaining the fantasy that, like Bill Murray in Groundhog Day, the American population is reborn every day, without having been impacted by even the recent past. At least Murray figures out that history seeps through each freshly repeated day.

Allegory and analogy –  as with Bertolt Brecht’s Epic Theater, these have long been fruitful methods for cultural works, because artists sometimes realize that the psyche is resistant to direct – and painful – explication. The contradictions of the present can be better conveyed through a different historical framework. The impact of such cultural works may not be immediate, but they have the potential to resonate over time in a spectator, in the same way that the analysand’s life can resonate indefinitely with the effects of a recounting told during a single session of analysis.

There is aggressive pleasure in projecting evil otherness onto a part of the culture that seems impossibly daunting to alter. The effects of culture will not take the place of (free) higher education or of the eradication of polarized wealth, but they have a role to play.