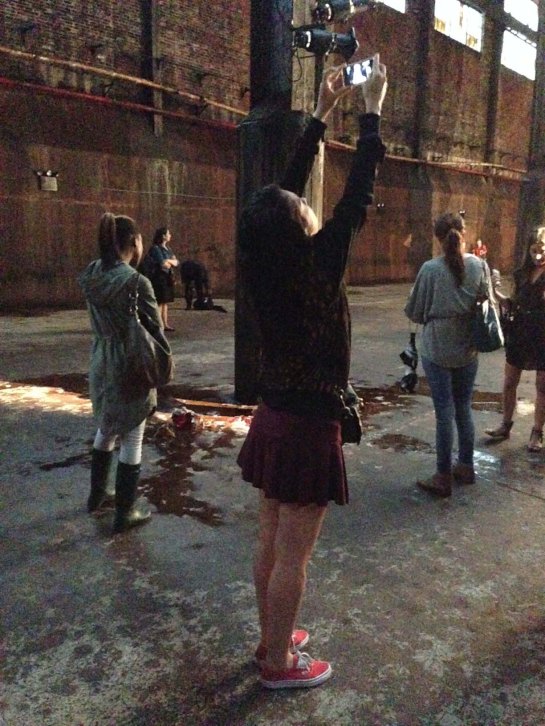 Generally speaking, defense is directed towards internal excitation (instinct); in practice, its action is extended to whatever representations (memories, phantasies) this excitation is bound to; and to any situation that is unpleasurable for the ego as a result of its incompatibility with the individual’s equilibrium and, to that extent, liable to spark off the excitation. …Defense is marked and infiltrated by its ultimate object-instinct-and consequently it often takes on a compulsive aspect, and works at least in part in an unconscious way. Definition of “Defense,” excerpt, Dictionary of Psychoanalysis, Jean Laplanche, Jean-Bertrand Pontalis.

I thought that braving a day-long, global-warming-downpour might have encouraged the giddily touristic spectatorship evident on the evening I went to visit A Subtlety, or the Marvelous Sugar Baby, an Homage to the unpaid and overworked Artisans who have refined our Sweet tastes from the cane fields to the Kitchens of the New World on the Occasion of the demolition of the Domino Sugar Refining Plant. But googling “Subtlety selfie” turned up 33,000 links, showing it was part of the general reaction to the work. On the evening i went, a manic fun-house atmosphere prevailed, with a constant flurry of spectator portrait- and selfie-taking. 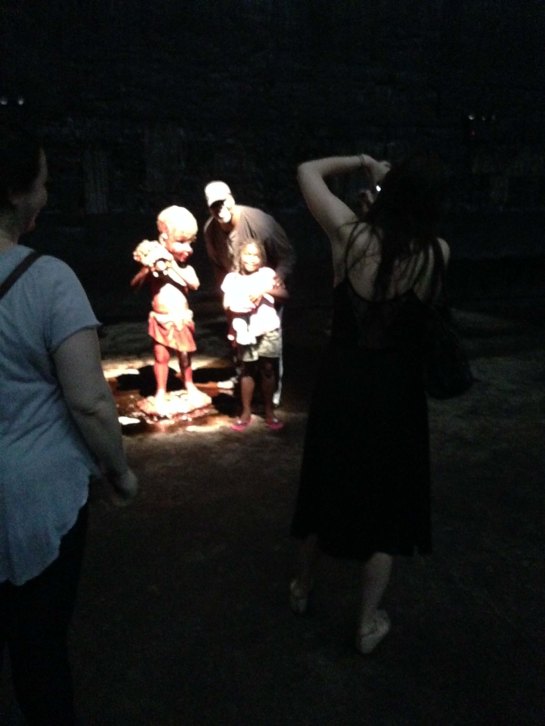 One would expect a more somber reaction to the historical brutality that is the overt para-text of the project, and to a space that witnessed decades of suffering. Online and print theories accounting for the “tasteless” selfies abound. But one online site will actually selfie-suture you in if you cannot manage to get to the exhibition in person. 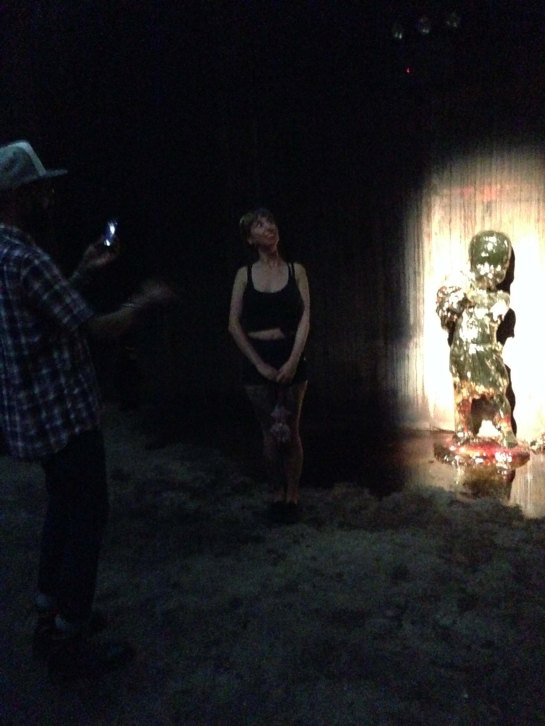 The newspaper and magazine articles and blogposts on the topic of Subtlety-selfies occupy a spectrum, with each being largely single-minded; there are conjectures about white disrespect for the black female body (although writers have also noted that a very diverse audience participates in the selfie-taking); about the self- and other-fetishization typical of the current technological apparatus of Capitalism, fetishization being a form of defense against unwanted thoughts; about the experience being an effect of spectacle culture in general, etc.

In some ways, the work sets itself up as the ideal object of the lens, oddly enough not because of its heroic scale; not because, as one writer has it, taking a selfie brings the giant-scale project down to human scale. Instead, my impression was that the scale itself is actually manageable in being (inadvertently, I assume) geared to the capacities of a digital phone camera lens. That is, standing in physical proximity to the mega-scale of the Egyptian Sphinx would not offer “The Subtlety”s frisson of self/object.

Well, it turns out that workarounds at the ancient sites have been found, and scales flattened thanks to the contemporary depth-of-field capacities of even phone cameras, as set in motion by consumer desire. But note the actual scale of the humans in physical proximity, and the distance required for “closeness.” 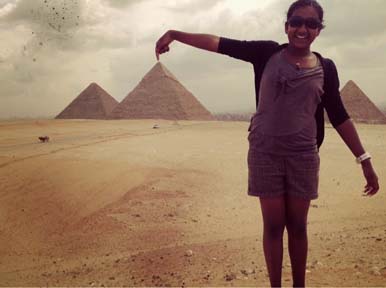 “A Subtlety” – given the luminosity of the “sphinx” in the dark space, and the bittersweet chiaroscuro light around the smaller figures of boys made of resin and molasses – is eminently photogenic. The camera loves this work, in the Hollywood and cinematic sense of love.

Although in a popular sense the work can be fit into the category of the spectacular, in a properly Debordian sense the project doesn’t fit the “spectacle” bill, because for Debord, spectacle culture depends on the repression of the historical, and the occupation of a continual present. Here the para-text  of the project – the history of sugar-growing and refinement, with its attendant slavery of one form or another, even once workers started to be wage laborers – the para-text offered on the multi-media website, artist and curator interviews, press media, outdoor title banner, p.r., moves you back and forth in time.

But maybe it’s the attenuation of connection between the discursive para-text and the tactility, materiality, and sensory aspects of the project and its containing space that produces disinhibition in spectators. I wasn’t able to push the para-text out of my mind in experiencing the work. But it was clear that most spectators did it quite efficiently. 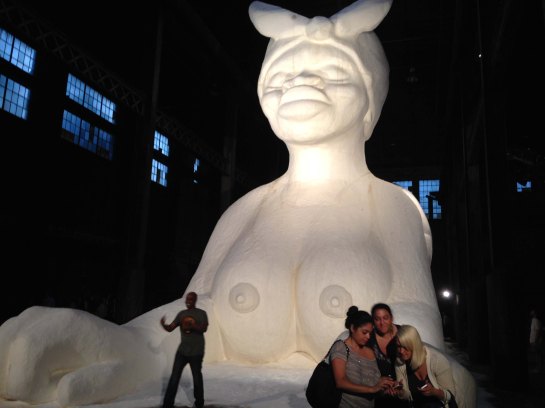 Perhaps “A Subtlety” produces a defended spectatorship, as in Freud’s observation that self-proclaimed boredom is sometimes its very opposite. Defendedness is not an ideal frame of mind for reflecting on history. Because if the internal conflict masked by the defense cannot be tolerated by the psyche, then it sets in motion a projection onto others of what frightens, scares, disturbs, so as to, following Jacqueline Rose on Christopher Berlatz, purify oneself and find fault in the other. The very purification that this work sets itself against. But maybe something always seeps through defenses. The psyche is not air-tight. And, as Rose says in regards to setbacks in feminism, the system (psychical, political, cultural) is not in a lock, or feminism would not exist at all. Norms fall apart in dreams and symptoms, perhaps prior to other dismantlings.

Maybe it’s also the case that “A Subtlety” is unwittingly produced at a scale that encourages, in dovetailing with the world’s most popular lens, a manic disinhibition, an unsubtle affect again not conducive to reflection. With spectatorship comes ethical responsibility, something that the popular equating of art with entertainment tends to obfuscate. Weeks later, the olfactory memory is still unnerving, now connected to the para-text. And the snap-happy spectators remain a central association. 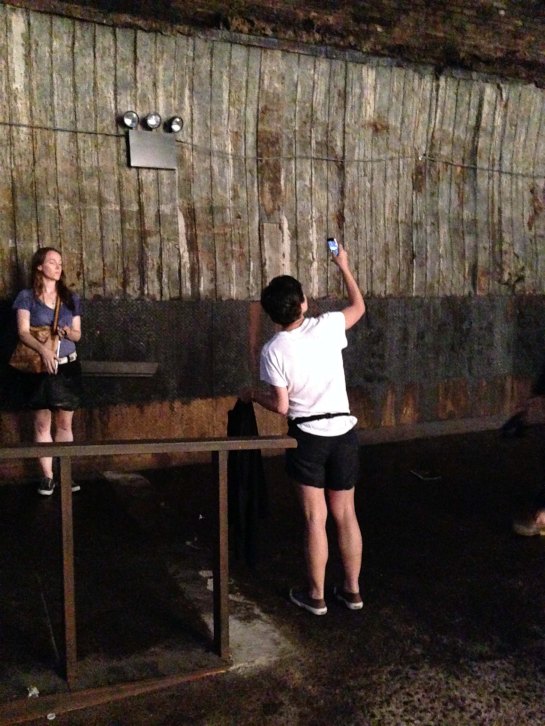