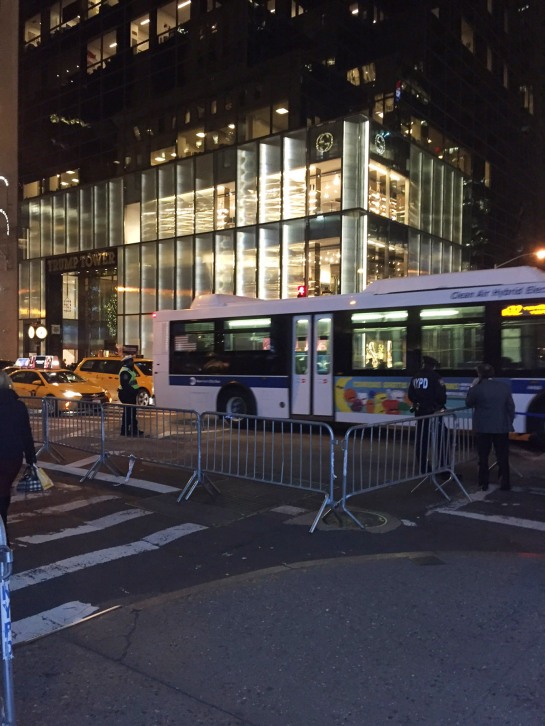 The night of the election, I went to bed before the final results were in. By that point, Clinton was down to a 50% chance of winning, so I thought I’d spare myself the gory play-by-play. But every hour or so after falling asleep, I lurched awake with my heart in my gut, thinking “Maybe Clinton squeaked through,” or “Oh my god, Trump is President.” Finally, at 4am, I picked up my phone to check and saw the anguishing results. I had had to hold my nose to vote for Clinton, but Trump’s triumph foretold unspeakable disasters.

Still, in spite of the sickeningly surreal confirmation that this country had elected a mentally unstable, reality-TV star whose onscreen role was to fire people, and whose discourses and actions included misogyny, sexual assault, racism, ethnic hatred, and financial deregulation favoring only the super-wealthy – in spite of this, within days it seemed to me clear that the election of such a person was not surprising, and would have happened four years from now if it hadn’t happened now. And let’s be real, a Cruz win – other than, maybe, regarding the question of the nuclear button – would have been equally harrowing. Say what you will about the popular vote favoring Clinton by 2 million votes, she wasn’t running to be president of New York, California, and Massachusetts, the only states where she picked up the great majority of her popular vote margin over Trump. (Trump won many, many states by large margins). She was running to be president of the whole country and Democrats completely underestimated the mass economic precarity and inchoate anger against dysfunctional government that drove large numbers of people to support a demagogue who did not represent their interests. And I’m not talking about the educated and moneyed Republicans who voted for him. Liberals can delude themselves that Trump was elected only by white racists and misogynists, but by doing so they conveniently overlook the fact that many counties and states that were won by Obama in 2012 went to Trump (i.e. the same voters), and that there were many indicators during the campaign that the white “working class”- in areas that had traditionally voted Democratic, and were suspended in the abyss created by globalization and automation -were going to shift to Trump. According to the NYT, for example, “The Wyoming River Valley of Pennsylvania voted for Mr. Trump. It had voted for Mr. Obama by double digits.” “Youngstown, Ohio, where Mr. Obama won by more than 20 points in 2012 was basically a draw.” “Counties [along Lake Erie] that supported Mr. Obama in 2012 voted for Mr. Trump by 20 points.“ “In Iowa, which Obama won easily in 2012, Trump easily prevailed. Trump won Maine’s second congressional district by 12 points; Obama had won it by 8 points.” And so on. Salaries for those up to their mid-30s have declined – accounting for inflation, which is always underreported in the US – by 36% since just 2008. And labor statistics don’t even account for the middle-aged who are unemployable and unable to collect unemployment benefits. 42 million Americans currently don’t have enough to eat every day. If it wasn’t going to be Trump in 2016, it would have been a demagogue equal to him in 2020.

But this is just a preamble to posting something here about an event that I attended the other night at the Miguel Abreu Gallery, in which Alain Badiou was asked by Abreu to respond to a presentation by the two men I think of as “the accelerationist guys” – Nick Srnicek and Alex Williams (an American and a Brit who both teach in London, and who in 2013 published “#Accelerate. Manifesto for an Accelerationist Politics” that addressed earlier positions by Nick Land and Benjamin Noys on the destructive drives of Capitalism, its effects on its subjects, and its potential for self-destruction. 2015 saw the expansion of the Srnicek/Williams text into an updated book entitled Inventing the Future. 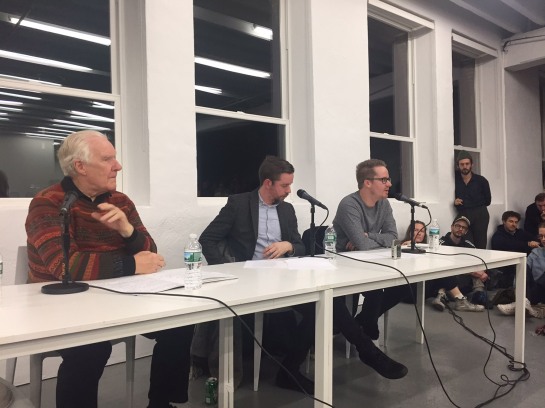 I wasn’t able to stay for the discussion that followed the presentation by Srnicek and Williams, and Badiou’s critique of their positions, but I feel that Badiou’s critique and proposals are so important for the present situation that they merit the dissemination that this blog platform provides. Because relatively modest as is my readership, I would guess that it’s pretty much made up of just the sort of people who should have heard Badiou’s points – left-oriented people who are eager, if not desperate, to figure out how to develop effective resistance to Trump specifically, and to the general relentless march to the political and economic right that we’ve witnessed in the U.S. (and other parts of the world) since the Reagan years.

When I was first led to read “#Accelerate” in 2013, I was excited at the prospect that someone was writing about the dissipation of left movements, and ways to strategize more effective resistance. But the Futurist-like arrogance, or coldness, of the tone and some of the ideas and omissions quickly put me off. I let it go without much thought or hope.

Much of the presentation made on the 22nd by Srnicek and Williams was of that ilk also, although their beginning analysis of the current effects of neoliberalism in the U.S. and some European countries was sound. Here were some of their points:

Contradictorily, they went on to say that Trump’s victory was clearly not about white working class suffering, because the black working class had suffered more (the unspoken point being that they largely voted for Clinton in spite of having suffered more). The white working class vote for Trump, according to them (and according to many American liberals, as far as I’ve seen) was a vote to resist the loss of white privilege. This was a very odd argument by them, or at the least a very unsubtle argument, since statistics as shown above prove a complex situation in terms of what motivated the white working vote for Trump (as well as for 29% of the Latino vote). At the very least, it’s obvious that whatever reservations Black voters had in supporting Clinton (and they did not turn out in historically significant numbers), one cannot blithely assume that their suffering would not have pushed them to a different kind of authoritarian demagogue promising unbounded economic recovery, while actually supporting only corporate power – one that might have been clever enough not to instrumentalize racism. To me, this kind of conveniently packaged thinking is belied by the utter lack, in the two long presentations made by Srnicek and Williams, of any reference to Trump’s dire misogyny. Another degree of illogic arose in their critique of current or post-2008 forms of resistance to neoliberalism. For them, resistance has taken the following ineffectual forms:

Although they were critical of the Occupy movement and its offshoots for having had no significant program and for being ineffective in combatting neoliberalism, they praised the Black Lives Matter movement, and even the Standing Rock resistance. I suppose this was because they had stated programs? Certainly they weren’t supporting them for their effectiveness in terms of results. Again, no mention of equivalent feminist or LGBTQ forms of resistance. 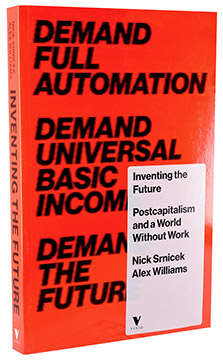 Srnicek and Williams made four clear demands that they felt were the only ways to deal with this moment of neoliberal breakdown in relation to what, for lack of a better term, I would call the 95% of the world:

They also added that one way to start to achieve these four was to create a four-day workweek. They ended their presentations with a question about whether neoliberalism was just in crisis or had already broken down completely, and indicated that it was not completely knowable at this moment, but that it had probably broken down completely.

Then it was Badiou’s turn to critique these arguments as laid out in their newly issued book. What struck me right away was the humanity of Badiou’s response, his consideration of the human subjects of the proposals at hand.

While he agreed with some of the Srnicek and Williams critiques of neoliberalism and ideas, he was deeply critical of the starting point of their argument and proposals.

His initial objections were to the categorical idea that defensive resistance was totally useless at this moment. For Badiou, there must be movements of different kinds across subjectivities, containing differences AND strong commonalities.

Srnicek and Williams had emphasized the essential need for envisioning a new kind of future. Badiou agreed that a new positive vision must unify people, and articulated the need for the creation of a new common sense in place of today’s kind of resistance. He invoked Gramsci, and referred to Mao’s ideological preparation of public opinion. To put it in my own words, mass demand for a new vision of the future wasn’t going to come without an effort to create commonalities amongst the marginal.

But the real critique began when he stated his objections to Srnicek and Williams’ three demands (WWW, Full automation, UBI):

What must be done, Badiou asked, before we resort to a future world war to abolish Capitalism? Strategy cannot be reduced to a vision of the future. Strategy must include judgment about what is possible NOW. Movements are a necessity. They say that what seems impossible is possible. This doesn’t always involve a program, but the possibility to experiment in the current situation at the border of what is impossible and what is possible. Resistance formation allows for the development of what is possible.

Badiou then stated four principles for developing resistance. These were not a program, but what he called protocols of judgment regarding decisions to be made for the development of strategic programs for resistance, for displacing the limit of what is impossible to what is possible:

And he closed his critique by stating that when collectivities developed programs for resistance, if all of these four principles were not included, then the program should not be developed.

As someone who takes a very holistic view of resistance, whose feminist activity– for example –is never without an analysis of power of all kinds – economic, racial, ethnic, gendered, this seems to me a very fruitful way to move forward in what is a new moment of crisis for the great majority of the world’s inhabitants. But I would add a fifth principle to Badiou’s four. Any program that does not recognize the dynamics of the human psyche, particularly in regards to fearful phenomena – its mechanisms of displacement and projection, for example – will never be able to generate collective engagement toward the common good, and will always be susceptible to being led by self-interested demagogues.