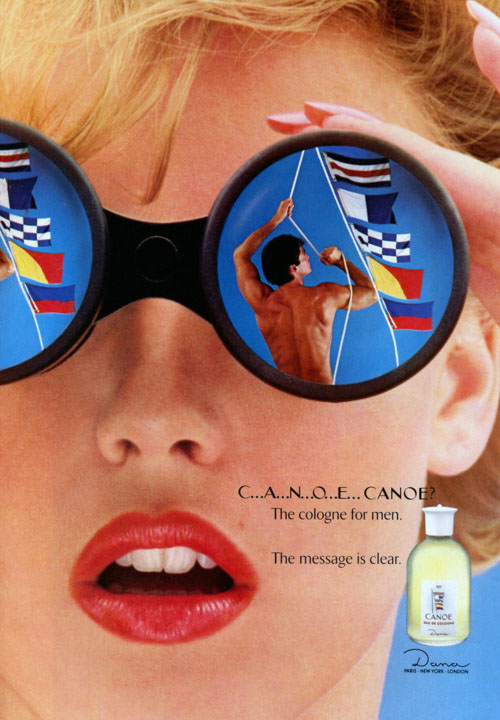 In the 1960s there was a catchy American tv commercial for Canoe men’s cologne that ended with the homonymically and metonymically suggestive tag line, “canoe canoe?” As with most scent ads, it’s clear that the “message” was not about cologne. “Understanding” is a complex activity. 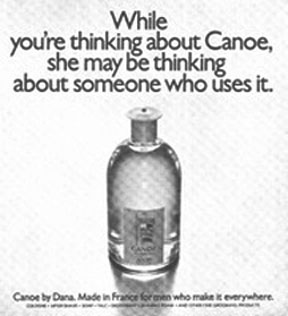 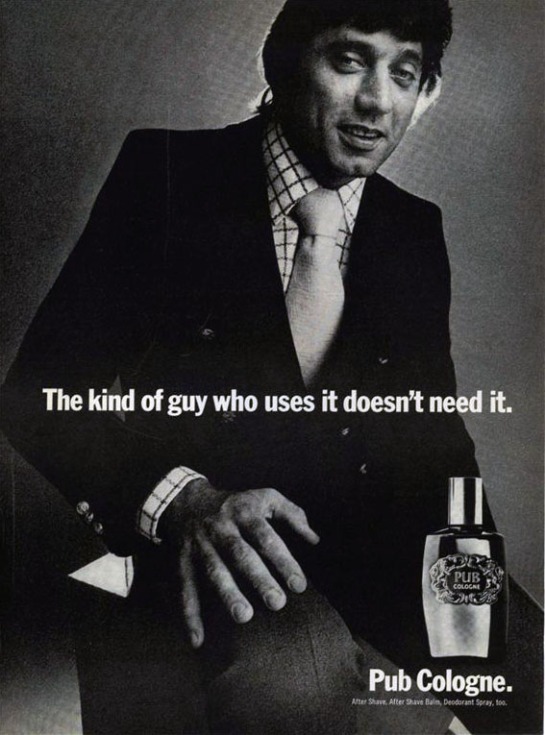 The other night, when I walked into the lower east side art gallery where French philosopher/playwright/poet Alain Badiou was giving a talk, I wasn’t surprised to see an overflow crowd, more than half of which was quite young. He has his critics within the worlds of philosophy and art, but he also has a surprisingly strong following in the art scene, maybe because, as I remarked to a friend, not many others are taking on the really big art subjects today, particularly in a face-to-face setting. The subjects that beg to be addressed through broad arguments, which can have an impact even when they are not transparently understood. 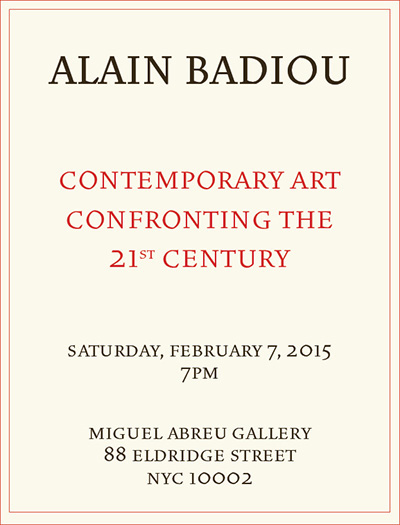 The source of Badiou’s considerable appeal lies in the understanding of philosophy that he defends. He writes that ‘Philosophy is something that helps change existence.’ Philosophy is neither technical and largely irrelevant logic-chopping nor is it deconstructive, melancholic poeticizing, what Badiou calls, ‘the delights of the margin.’ On the contrary, philosophy is an affirmative, constructive discipline of thought. Crucially, this is thought ‘not about what is, but about what is not.’ Philosophy is the construction of the formal possibility of something that would break with what Badiou calls the ‘febrile sterility’ of the contemporary world. this is what he calls an event, and the only question of politics, for Badiou, is whether there is something that might be worthy of the name event.

Simon Critchley, “On Badiou’s Politics,” in” Democracy and Disappointment: On the Politics of Resistance, 2007″ 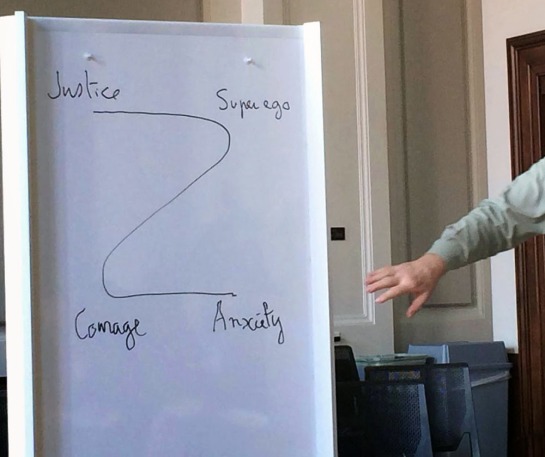 Badiou has an uncanny ability to swing from the abstract to the concrete referent and back. When he is abstract, he is unnervingly, intensely so. But in the talk the other day, he created a kind of complex clarity by repeatedly framing his argument about the potential “infinitude” of aesthetic practices of the future with references to the finitude of our capitalist regime, in which everything has its literal price. I looked around the audience during the talk and wondered how many were following closely his abstract argument. And the questions that followed the talk did reveal a chasm between two extremes. There were the arcane and myopically off-topic questions articulated from within a philosophy-specific discourse, which Badiou reservedly answered. And there were the extremely basic (overtly apologetic) questions asked by two young people who were likely artists. Those two questions, in fact, generated the most interesting responses from Badiou, as well as one’s own reflections on the talk.

The e-vite blurb had included the following:

Under new conditions, the arrival of the twenty-first century faces a technical challenge comparable only to the invention of the printing press, or to the emergence of oil painting: the ability to digitize, including basic creative gestures, affords a sort of independence to the term “art” from the notion of “craft.” Artistic contexts of a semi-industrial type have appeared, and moreover, the systematic occupation by artists in the West of wastelands left by deindustrialization has become a major symbol of the period: creation nowadays takes place in old automobile factories and workshops, in outdated giant cold storage warehouses, in the huge debris of assembly line labor, in sawdust, tar, and gasoline. What will come out of this? Let us make a few assumptions…– Alain Badiou

Interestingly, this blurb is itself somewhat outdated in relation to the title of the talk. Surely the most urgent questions about art and technology do not concern the taking over of the debris of assembly line labor. But Badiou’s talk was much more mind-expanding and challenging than the blurb suggested it would be. Attendees received a page of points that he was going to address, some of which he addressed directly, though interestingly not in a linear way, and some of which he spontaneously chose not to address. Those omissions were perhaps performative, and they had their transferential effects in that regard – his talk was presentation, as much as meta-discourse. 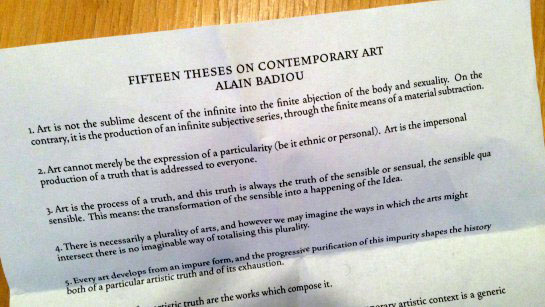 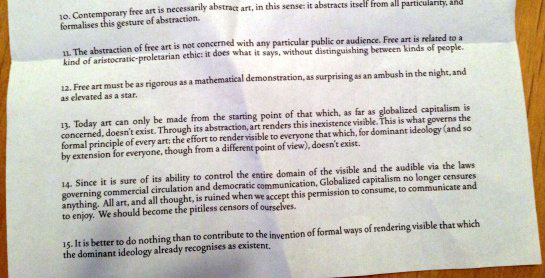 As with a lot of Badiou’s writing, there was a radicality in his projections of a future art. These were large propositions, and when asked later what art or artists of today he thought exemplary, he rightfully refused to answer other than to say that philosophy should not have to play the role of critic.

The other day, a young artist told me that some of his colleagues had been arguing, in the context of today’s vertiginous social disparities and global conflict, for the futility of the small “critical” art gesture as against the direct action of what is defined as political activism. This is an argument that crops up repeatedly in the realms of critical art practice. The most cogent argument against such positions is the one that recognizes public realms as existing at all scales; the argument that recognizes that both harm and change are enacted at all scales and temporalities, with elusive quantifiability. 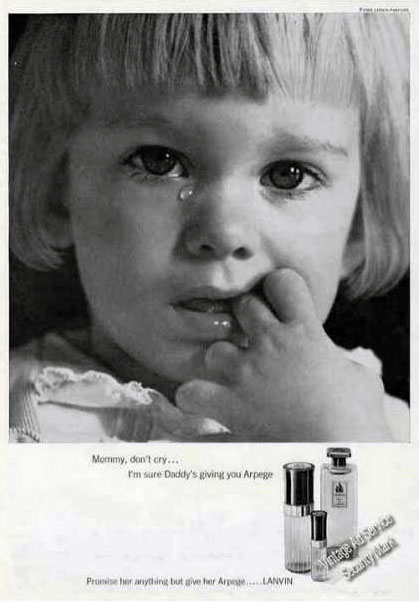 But Badiou’s projections that day so stretched ideas about a future art that they took it to another scale, a scale at which the status of art today (market fetish or critical endeavor) would be unrecognizable. Regardless of how extensively one understands Badiou’s work and the many arguments surrounding it, that form of projection is breathtakingly crucial in opening up definitions of art, and re-casting the importance we accord to today’s conventional art institutions and aesthetic production. It made, for example, the current chest-thumping proclamations for “collective art” seem ridiculously overblown. Here are some notes that I jotted down:

Art will become collective and anonymous in the way that science is today. We don’t herald or fetishize individual achievements on a personal level in science (except for every 50 years or so – Darwin, Einstein, etc.), and the future art will occupy the same status.

Art must position itself near politics and near science. Numerization is the organizer of knowledge and power today.  Art must be the master of númerization. Art must have something to do with science.

Art will (must) become more like what poetry is today – an exception to the globalized structure of capitalism. That is the definition of freedom. There are rich arts and poor arts – art will be a poor art.

In order to be an exception to the globalized structure of capitalism, the future art must be a surprise. The surprise of the infinite. The modern form of finitude is the market in which everything has a price and the price is always finite. The exception must resist this finitude. Must not be distributed along the structure of the everyday. It will not be distributed as we know it.

It is necessary to have a strong knowledge of the structure of power, politics, science. Nothing in politics that is not a surprise is of interest.

The law of permissiveness…Freedom today is defined as adequation to the existing capitalist system.  We need to organize ourselves through interdiction and other methods to resist the adequation.